What Are The Costs Of Developing An App? 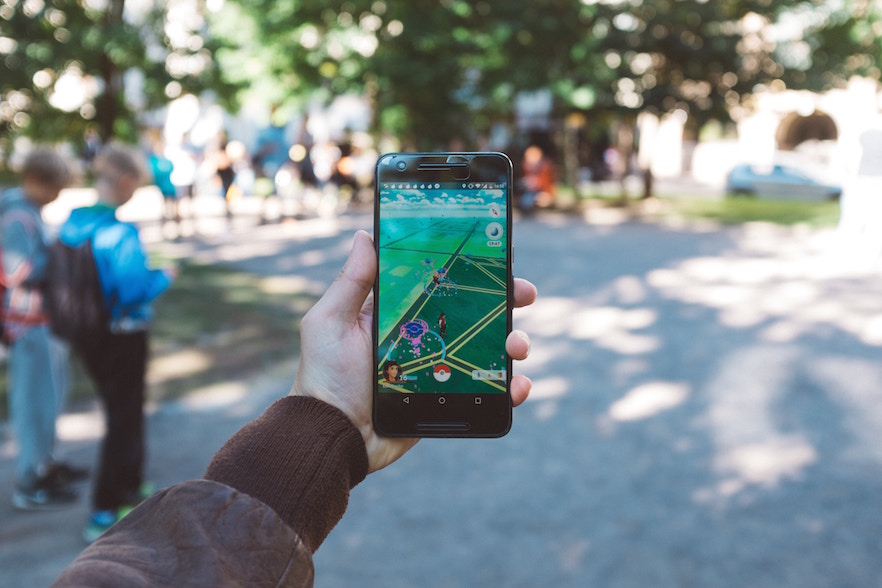 What Are The Costs Of Developing An App?

Out of all the questions that are asked about the app development process, the one we always hear is “how much will it cost?”.

This is a very broad question and is hard to answer without the ins and outs of each project. When offered a vague idea of the costs of developing an app, people seem a bit taken aback.  Ever since becoming an integral part of our everyday, the process of downloading and using an app has been simplified.  As a result, users outside of the tech world think this simplicity must be a reflection of the development process. They couldn’t be more wrong. There is in fact, a lot of hard work that goes into development prior to an apps launch. It is also a common misconception that the cost of developing an app is quite small, on the grounds that they’re often free or purchased for as little as 0.99 cents.

The cost of developing an app can be determined by the total man hours it takes from start to finish, multiplied by the development teams hourly rate. This unsurprisingly, is a lot more than a mere 0.99 cents. If the price of an for app depends on the amount of man hours, what factors influence the amount of time required to complete a project?

The decision to build your app on Web, iOS, Android or all three, will significantly alter the cost of development. Something to consider is the fact that developing on Android can bloat design times, in comparison to iOS. This is because there are several screen sizes for Android, so the designer must alter the layout to suit each different sized device. This takes up a lot of time and doesn’t actually guarantee compatibility for every screen size. Therefore makes building for Android more expensive purely based on the added design time.

iOS and Android both run on different software, it takes a lot more work to make an app available on both devices than you’d think. Cross-platform development enables a developer to build an app for both devices at once. This can reduce the costs of developing an app on both platforms instead of building them individually, however it will cost more than developing for just the one. Cross-platform development also uses one design layout for both devices. This can result in your app layout not reflecting the design of the platforms interface. That’s not to say you shouldn’t develop for both platforms. If you’ve done your research and you’re confident this is the best option for your target market then go ahead, as long as you have the money within your budget to do so.

The front-end of an app is everything the user comes into contact with during their experience. This includes the journey from the opening of the app to its closure, all the features the user has access to as well as the interface or design. Each app will have a different variation and combination of these, altering the price for every project.

Design is an unavoidable element of the development process. It actually is just as fundamental to the functionality of an app  as the code; an app is unusable if there is no interface. Depending on your needs, designs can significantly impact the costs of developing an app. The navigation on iOS, Android and Web is quite different. If you’ve decided to build your app for both platforms this is going to significantly increase the graphic designers hours. If you want your app to be across all devices, that is on mobile, watch, tablet and web then you can expect another increase in app development prices.

If your target market is a lover of all things design then the interface needs to be beautiful and consistent with your brand, which doesn’t come cheap. Don’t forget the need for an icon to attract more downloads from the app store. Depending on their skills, a designer can charge anywhere between $20 to $140 an hour. 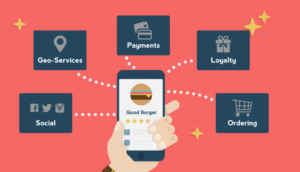 The amount and complexity of features desired impacts the costs of developing an app. Credit: Popdeem

The amount of features in your app is going to be one of the biggest influence on the price of development  being  sky high or not. Usually, an entrepreneurs desired first version of their app is packed full of features. The more features in an app means more man hours dedicated to coding, which results in a higher cost. It can’t be stressed enough that an MVP is the best way of cutting down on development costs as well as the risks associated with a startup. Features include, but are not limited to:

Complexity is dependent on the nature of the app and he amount of features required. It makes sense that an app implementing all the features listed above would be a lot more complex and therefore time consuming to develop than a standalone note taking app, which only requires the ability to create, type and then save those notes in-app. A complex app would also be one of similar nature to Uber. That is, it requires two separate interfaces. One is the demand side or the users who are requesting a ride, the other the supply side where drivers offer their services.

The complexity of an app is also defined by whether or not it requires a connection to a server; there is an interrelationship between the two. If an app employs a payment gateway, there must be a back-end containing an API that connects the device with the necessary server or database.

The back-end is therefore where all magic happens behind the app, it includes everything that the user doesn’t see in the front-end. It is also where the information and functionality from the fron-tend is stored. A back-end is not always necessary, it contains a lot of elements. There are many different projects where perhaps only one element may be required. When it is needed however, it takes a lot of work to build and therefore ups the costs of developing an app.

The difference between the Front-End and Back-End of App Development. Credit: Konstant

The database is where all the information required to make the app function is stored. A database is required often more than not, unless it is a standalone app such as the note taking app described previously. Not only does it take time to enter information and program it to gather information, it must also be designed to look good while it does so.  This includes, but is not limited to:

An API sits on top of the server and is used as an avenue to transfer information from the database back to the user in the app. It can be quite tricky to understand, so think of in-app payments as an example. Stripe is a payment gateway service used when making in-app purchases. The service does not sit inside the app, so when a user wants to make a payment an API must connect the user to Stripe’s server to enable the user to make the payment via Stripe’s services.

WHO you choose  to DEVELOP your app

Everything we’ve touched on above are all interchangeable variables, the biggest decider on the costs of developing an app is who you hire to do it. There is offshore, freelance and development agencies all waiting to do the work for you, each with a different price-tag. 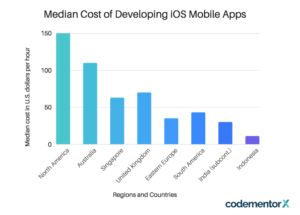 The costs of developing an app differs per region. Credit: Codementor

Getting an app developed offshore is going to be the cheapest option. Depending on all the variables discussed above, a ballpark figure would be anywhere from $5,000 to $30,000. Sounds great, right? Well, you definitely get what you’ve paid for! More often than not, clients come to us to fix the apps they’ve shipped off overseas for development. Due to miscommunication and language barriers, apps developed in cheaper countries come back with a tonne of baggage. Bugs, crashes, poorly built wireframes and designs, not to mention spelling errors! You then have three options. Firstly, you can start from scratch which is a massive loss. Second, you can hire someone to fix it, which can cost more than the initial quote to get it done in your home county. Lastly, you can watch your app dreams crash and burn.

Right next to shipping your development offshore, hiring a freelancer is next in line for affordability. While you don’t have the issue of any language barriers, there’s still plenty of risks associated with this option. It’s probable that one person will be in charge of the entire project- a jack of all trades if you must. 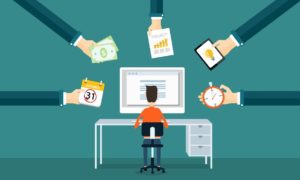 This comes with issues in itself. A freelancer’s skills are unfiltered. They can be great at coding, but unskilled in all other areas of development…

Or they could be unskilled in all departments, which means bad news for you. It is doubtful that with a freelancers level of expertise you’ll wind up with the app of your dreams, regardless of skill.

You’ve also got to worry about their lack of motivation, time, commitment and even face the risk of them running off into the sunset with your money, never to be seen again! To get a good app this way you’d be looking at hiring a team of freelancers. You could be saving about 20% of the development costs however, you’ll still be paying anywhere between $20,000 to $60,000 and running the risk of seeing nothing for it. You’d also have to face being project manager, managing communications among the entire team. If this isn’t your expertise it can result in delays as well as the risk of someone going rogue. Another worry is that developers are notorious for underestimating time frames. You’ll more than likely get quoted 2 months, only to have the work completed 5 months later at triple the cost.

You get your money’s worth with an agency. You hire a team of designers, developers and marketers who are all held accountable by project managers. Hiring a tightly knit team ensures consistency, efficient communication and most importantly a quality app. An agency has a high level of expertise and an existing reputation which they are keen to uphold, so you can feel secure with your decision. They also come along with insurance that covers you in case anything goes wrong, which can save you from any nasty lawsuits.

It is advisable that you update your app for maintenance. Apps People among other agencies offer maintenance packages on top off the costs of developing an app. The cost of this depends on how many hours of work a month you need for updates, ranging from $100 to $200 per hour. While this is optional, updating your app is strongly recommended. If you don’t update your app, you run the risk of losing customer engagement and getting a bunch of bugs purely from operating system updates.