How Often Should You Update Your App? 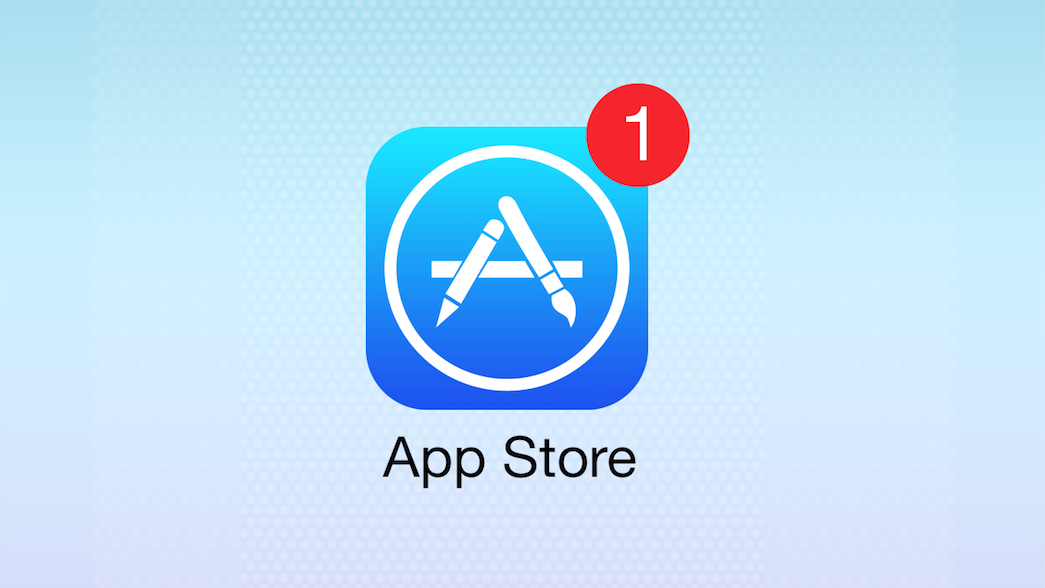 How Often Should You Update Your App?

Apps need more TLC than you’d think. If you just launch and leave it out in the app world to fend for itself, it will wind up in the app graveyard. You need to update your app as it is crucial to its success and adoption in the market. If you’re wondering how often you should update your app, you first need a firm understanding of why and how it is beneficial to your apps survival. 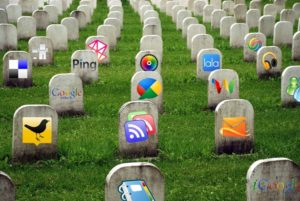 If you don’t update your app it will wind up in the app graveyard. Credit: Through the Backdoor Only

If you love your app and want others to love it too, then you should update your app.

You’ve put a lot of time and money into making your app idea a reality, so why let it slip through your fingers now by not maintaining it? You should be tracking your app and how it is being used. Pay close attention to your customers demands. If you’ve found some bugs, fix them as soon as possible. Your customer can only deal with so many glitches before they give up.

Letting your app sit on the shelf to collect dust also shows you don’t really care all that much, so why would your consumer? Listen to what your users demands are and try your hardest to meet them. Implement new features or improve existing ones. Especially if they’ve been highly requested or you’re confident it will create a better experience. Not only will this increase engagement with the app, it will also encourage your customers to be more loyal. Introducing new features also means you can re-promote. You can re-kindle an old flame or two with those loyal-at-heart users whose lives just got a bit carried away.

Updates involving the implementation of a new feature are considered to be major app updates, leaving minor updates responsible for bug and other software issues. Minor updates see its version number shown through a change in its three-digit sequence. For example, an update that focused on a bug fix would go from v3.1 to v3.1.1. While a feature update would see a change in the second number of its version, from v3.1 to v3.2.

How do you know when you should update your app? 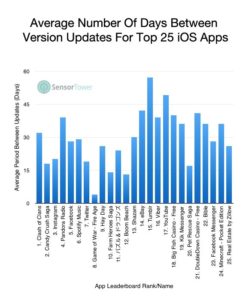 30 is the average number of days between updates for the top 25 iOS Apps. Credit: Talking New Media

As vague as this may sound, it depends on several variables. How big is your app? What is the nature of your app?

“The more complicated and feature-heavy an app is, the more often you’ll need to update it.” -Nick Genty of Iconic Solutions

The largest and most successful apps can be updated anywhere between weekly and fortnightly. Facebook actually has an update schedule, and fires out updates for their app every 2 weeks. Ideally you should be aiming for minor bug and software updates once a month, minimum. Major updates introducing or improving new features can be stretched out a bit more, ranging from monthly to a few times a year depending on your individual circumstances.  At Apps People we recommend you update at least 2-4 times a year, and that’s only if the nature of your app is a very simple solution.

Sometimes bug issues arise due to a change in the phones operating system. Apple released their newest version of iOS and your app carks it. Changes in the database you’re using can also have this same effect. However, minor updates usually revolve around the implementation of major updates.

Your app is in its initial release, has just been launched and all is dandy. Even if you’ve worked with a great developer it is normal to have a list of bugs that need to be re-worked a week or two in. v1.0.1 is released and your customers are all smiles again! For the meantime you should get used to scheduling weekly, fortnightly or monthly bug fixes. Ensuring that it’s smooth sailing and you’ve really got it working well.

A few months down the line, your consumers start making a few demands or you’re analysing feedback from the user experience. They love a feature, are ignoring features or need improvements. You must then make changes accordingly. This means implementing something new to keep them engaged, removing unwanted features or improving the ones they love. So you build, test and introduce these new features and all is dandy! A week or two later, you’ve got a new list of bugs that need to be re-worked. And the loop continues!

This means that if your app is a social media or messaging service that gets used daily, weekly updates are justified. Because the app is so prominent in the day-to-day life of the user, they most likely won’t mind having to update and will probably appreciate the updates more. If your app is used less frequently, anything more than monthly updates is unnecessary. They go unnoticed, won’t be appreciated and just means you’re wasting time and money. 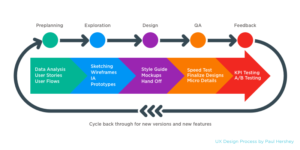 Users not only abandon apps, developers can abandon them too. If you’re too busy to update your app then it’s doubtful you have the time to plan and attend an app funeral, so perhaps reconsider your venture into the app industry. Listen to your consumers, after all the customer is always right! Don’t be afraid to adapt and innovate to demands and trends, its what’s going to keep your app thriving.